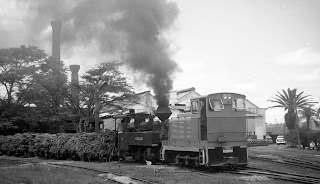 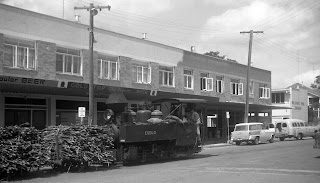 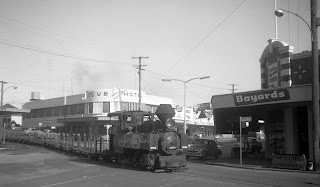 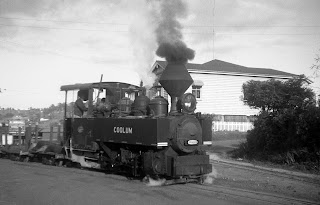 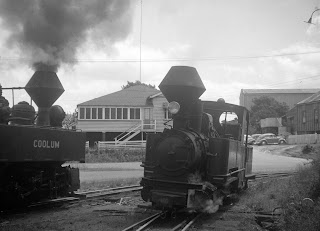 http://www.youtube.com/watch?v=9NOBiIjxRyc
G'day all, I mistakenly sent the link to the above Moreton Mill clip late last week, I had meant to save it for the regular Monday posting. Perhaps I should say semi-regular. I've included it again so that it will appear when this posting goes to the Teenage Railfan site. The loco is a Bundaberg Fowler, apparently it was an occasional guest at Nambour during the '90s.
Anyway this week and next we will be at the Moreton Mill at Nambour. This sugar mill finally closed in December 2003 and NearMap for July 2010 shows the mill site totally cleared but with the track still visible from the street into the site just west of the intersection of Howard Street and Currie Street.
Looking at the 1962 Queensland Railways public timetable I would say that we left Brisbane on the 8.22 am Gympie passenger which got us over the 65 miles to Nambour in 3 hours and 7 minutes behind dark green Pacific 1036.
If I remember correctly our first sight of the mill operation was Petrie running light engine across the intersection of Currie Street and past the two pubs that still stand at this corner, the "Club" and the "Royal George".
The other photos are all at this intersection or in the mill yard. It was a busy tramway with four steam locos working, Coolum, Eudlo, Moreton and Petrie and at least one of the diesels too, I think there were only two at the time.
Later that day, after dark in fact, we were lucky enough to be taken out along the main line of the tramway deep into the canefields. We travelled on one of the diesels on a very dark night right out to somewhere along the river, all I know about the actual location is that retired tramway loco Valdora was preserved out there. The intrepid railway explorer Westy ventured off to get a photo but was, I think, defeated by the total absence of any light.
So when we returned to Nambour we camped for the night in a wagon in a siding near the station, sheer luxury.
All the locos carried the once ubiquitous canvas or hessian waterbags.
In the background of the photo of Coolum and the diesel shoving a rake into the mill you can see an old Commer truck and also a Blitzwagon. The Blitzs were all over Queensland in those days before the invasion of Toyota 4x4s and I remember a sales yard in South Brisbane devoted to them and the occasional Land Rover.
Next week I'll post some pictures of the out of service Shay at the Mill.
Previous postings at http://teenagerailfan.blogspot.com
Regards,
Peter Bruce.
P.S. Denys Williams disregard what follows, remember, It's the opposite of Playboy, you only get it for the pictures!!
I consulted widely about the location of the Ipswich Loco Depot and Dave MacCartney told me that it was actually over the river and near the workshops. I have just had a look at my friend NearMap again and the imprint of the turntable and the roundhouse tracks is clearly visible in the area between the Workshop leads and North Street and the school that I was using to try and locate the roundhouse is just southeast at the corner of Downs Street and Fitzgibbon Street. And it is not a Catholic School at all, I must have imagined the cross, it is Ipswich North Primary. The junction for the Workshops is a trailing one just west of the station and there is a signal box there still and a turntable is visible near that and in the shadows of the Ipswich City Mall buildings. Dave thought he recalled a facing junction west of the station for the roundhouse/workshops access track. Thanks Pat Cairney for your educated guess but we were all looking in the wrong direction and we were in the wrong place anyhow.
Posted by I was a Teenage Railfan. at 18:43