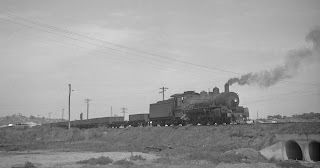 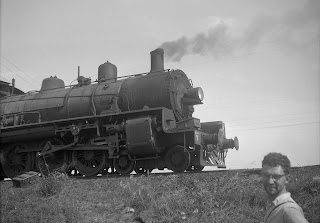 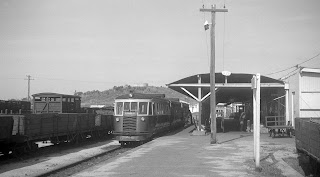 G'day all, I've been away a bit over the last few weeks as well as being fairly busy so havn't had the time to spend on MMP. In the meantime I've had some very informative emails from Queenslanders Arthur Robinson and Brian Webber as well as from Geoff Kirton here in Melbourne and I have posted them at my blog http://teenagerailfan.blogspot.com I'll pick up the journey at Bowen, I'm guessing [definitely not remembering] that we travelled the 115 miles and 38 chains north from Mackay on a very slow goods behind Pacific 1028 seen here with fellow traveller Graeme Westwood always and still only known as Westy.
Some time later RM94 arrived, according to the Working Timetable for the Northern Division issued on 22 July 1962 this left Townsville at 7.55am and stopped almost everywhere before getting to Bowen at 2.10pm on this particular Saturday arvo.
About all I can remember about Bowen is catching the northbound "Sunlander" to reach Townsville, there was nothing else running so we actually had to contribute to the QGR's financial health by buying tickets.
We got to Townsville not long after sun-up and stepping out of the airconditioned cars was like stepping into a sauna and the sun was bouncing off that big rock that dominates the city.
I'll take a break from 1964 Queensland for my next effort and post a few pictures taken on my recent visit to South Australia.
Regards,
Peter Bruce.
Posted by I was a Teenage Railfan. at 15:35 No comments:

> Hello Peter,
>
> Having got the pronounciation debate out-of-the-way yesterday and sent the
> email - suddenly remembered why you would be having problems with Mackay
> Railway Stat.and Google Earth.
>
> Reason is that the railway was deviated from Paget to the south to the
> west of Mackay some time in the early to mid. 1990's.
> Fortunately our RMIT University Library has a Qld. country street
> directory.
> Sure enough the former railway and yards near the CBD and from the south &
> west have been removed, with a new station for Mackay constructed at
> Paget, 4 km south of the original station.
> Paget was the junction for the North Coast Line & the branch west to Finch
> Hatton, and a couple of other places originally, including Victoria.
>
> Reasons were to upgrade the NCL to 21 ton axle load, concrete sleepers,
> CTC and replacement of wooden bridges, so that marvellous 180 degree curve
> to enter Mackay from the east has gone.
> The steel girder bridge over the Pioneer River west of Mackay was needing
> to be upgraded or replaced, I seem to remember, so another station out of
> the city centre and another deviation was constructed.
> Added benefits of course were removing level Xings and freeing up valuable
> real estate ha! ha!
> Unsure whether the original station has been kept - this where Google Maps
> & Google Earth are required!
>
> Still does not conclusively solve the location of your 3rd & 4th photos,
> but still inclined to suggest Prosperine with its sugar mill, the next
> major town heading north up the NCL.
>
> Cheers
>
>
> Geoff Kirton
>

From: Dad
Sent: Tuesday, April 26, 2011 8:24 AM
To: Peter Bruce
Subject: Re: Monday Morning Photo. 25/04/2011.
Peter,
I am fairly certain that the photos of  B18 1/4 No. 27 at the north end of the yard and and BB 1073 and PB15 105 are at Mackay, the sugar boxes are the confirmation.
The other two photos are at Bundaberg, 569 is has just come off the bridge over the Burnett River and is crossing Burbong Street.
1617 is on the same road crossing which is at the end of Bundaberg station.
I have forwarded the photos to Arthur Hayes and Brian Webber, both spent some time in Mackay in the days of steam, Arthur a a fireman and Brian as a railway enthuasist and photographer.
The locomotive 105 is a C16 not a PB15. The C16s when rebuilt with the "Master Mechanics Front End" were the only QR locos with the distinctive tapered funnel.
The numbers are interesting as QR reallocated locomotive numbers. For example of B18 1/4 No. 27 was built in 1935 after C16 No.105.
Back when I was a young lad I thought that PB15 No. 5 was QR's the fifth loco, it was all very confusing especially as there was a C17 No. 2.
Incidentally when I joined QR in 1981 my service number was lower than others with longer service, another QR venture into the world of recycling.
QR also recycled bridge girders, so far I have found 65 instances, some for rail bridges and others for road overbridges.
Others were sold to The Main Roads Department and sugar mills for reuse.
Arthur Robinson
Posted by I was a Teenage Railfan. at 15:01 No comments:

From: Brian Webber
Sent: Tuesday, April 26, 2011 9:31 AM
To: Dad ; Hayes, Arthur ; pbruce1@optusnet.com.au
Cc: Hallam, Greg ; Farlow, Caitlin ; Campbell, Dennis ; Elsol, John ; David Langley ; Bruce McLean ; jgof@datafast.net.au ; Graeme Cleak ; Bob Wilson ; Weston Langford ; John Phillips ; John Thompson ; liamdavies@optusnet.com.au ; milantram1859@yahoo.com
Subject: Re: Monday Morning Photo. 25/04/2011.
Gents
My credentials are that I worked for a Bank in Bundaberg in 1962/63 and in Mackay in 1963/65, 1969 and 1979-81.  How lucky can one be!!
1617 is leaving the [South] Bundaberg station on the main line [platform road] and running north probably to North Bundaberg loco to stable.
105 is a C16 and is working a harbour shunt.  It will take its train of sugar box MTWs through the Goods Yard and across one of the 3 Pioneer River bridges [at that time] to Mackay Harbour.  Note a down train in the platform road and the Netherdale Rail Motor [a 102hp unit and two trailers] in the east Up dock.
569 is arriving [South] Bundaberg off the Burnett River bridge with a goods, probably from Wallaville or Tirroan although it is possible it is leaving the Millaquin branch [the junction is below the train and the line ran east [to the right of the photo].
When I first visited Mackay, the locals told me it was pronounced Mac K as that was how the person the town was named after pronounced it but when I last worked in Mackay in 1981 it had evolved to Muck eye.
Thank you for the memories.  Bundaberg is little changed but the area of Mackay Passenger station is gone replaced by the by-pass and the current station at what was previously Paget.
Brian Webber
Posted by I was a Teenage Railfan. at 14:59 No comments: 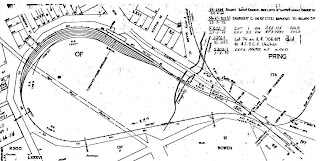 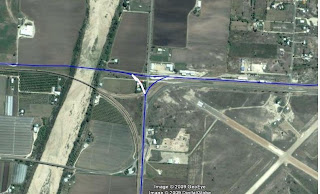 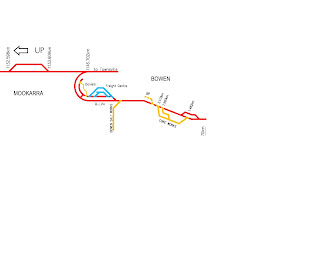 The original Bowen Station was on the seafront near the Jetty and the locomotive depot remained there when the new station to the west of the town was opened.
The old North Coast Line from the south turned right just before the Don River and ran into Bowen on a track parallel to the track from the north.
The newer Bowen Station had balloon loop to avoid the need to reverse trains.
The two tracks between Don and Bowen were operated as two single track lines.
This arrangement was bypassed in 1990 with a new bridge over the Don River. A triangular connection to Bowen and a new platform built on the main line to serve Bowen.
The only tracks that remain are to the freight centre at Don, the salt works siding and the coke works siding which is on the okd harbour line.
The attached diagrams should explain the layout.
In the Don screenshot from google earth the old line is blue and the present line black.
Arthur R
.
----- Original Message -----

From: Peter Bruce
To: Arthur Robinson
Sent: Tuesday, April 26, 2011 1:50 PM
Subject: Fw: Monday Morning Photo. 25/04/2011.
Arthur, edited text of my last posting below. Apologies.
PB.
From: Peter Bruce
Sent: Tuesday, April 26, 2011 1:29 PM
To: Dad
Subject: Re: Monday Morning Photo. 25/04/2011.
G'day Arthur, I have that photo of 1073 and 105 on my desktop and when I sat down at the computer just a few minutes ago I looked at 105 and said to myself that's not a PB15 it's a C16, as you say the funnel is the give-away. Your's was the first email I opened and sure enough I had got it wrong......and it was nothing to do with it being a long time ago because I've posted shots of C16s recently and I've used the qrig.org website to confirm loco numbers.
Thanks for the info on the two pics I was unsure about, I couldn't reconcile the position of the station platform relative to the level crossing and had no idea that it was Bundaberg.
The old QGR was certainly an interesting railway, I'm hoping to get up your way fairly soon to have a look at today's Queensland Railways.
Regards,
Peter Bruce.
P.S. Bowen is my next puzzle, I had forgotten its layout. I have had a look at Google Earth and can't find the station, does it have a balloon loop still? Anyway I'll put some photos up probably the week after next as I'll be away in SA next weekend. 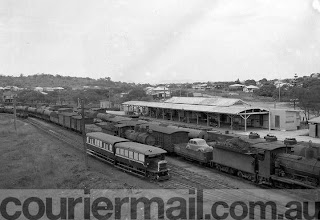 Photo of Bowen Railway Station 1953.
Note that variety of wagons, no two seem to be the same.
This was typical of QR in the 1950s.
Arthur R