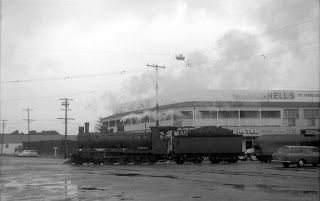 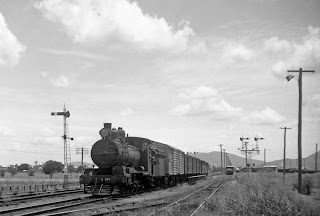 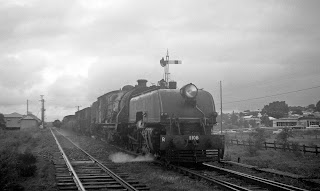 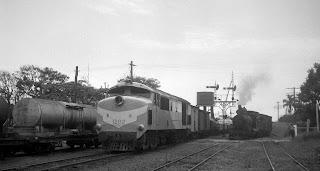 --
G'day all, back to Rockhampton 1964.... Denison Street after the rain and an anonymous C16 clanks past McConnell's Hotel, "it's friendlier", at least so says the sign above the upstairs verandah, I suppose that's a water gin behind the tender of the C16......maybe not? Any opinions?
The other three photos are all at the other end of the very extensive railway establishment at Rocky, between the end of the yard and Port Curtis Junction. C16 614 is shunting the the south end of the yard, red Beyer-Garratt 1108 is approaching Port Curtis Junction on it's way west and I think 1202 is waiting departure time with a southbound goods while Pb15 520 knocks a few wagons around in a desultory, sub-tropical way. Although Rockhampton wasn't what you would have called a Railway Town, like say Ararat in Victoria or Peterborough in S.A it was a very busy location 24 hours a day and would have employed several hundred railway people altogether. I wonder how many it keeps busy these days!
Rocky was, and of course still is, too big to be just a railway town, it wasn't railway dependant for much of its employment unlike Peterborough and Ararat.
But in 2011 the trains still run along Denison Street. Take a look at Google Earth.
Regards,
Peter Bruce.
P.S. All Queensland steam locos clanked, I think much more so than any others. I remember the sound as being clank-clonk actually. Am I remembering accurately or is my memory playing up again??
Posted by I was a Teenage Railfan. at 20:58 2 comments: