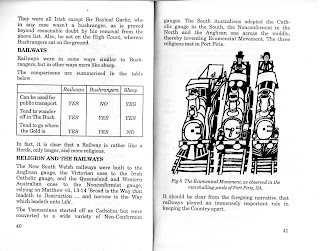 For what it is worth, the existence of three gauges at Port Pirie was noted by Prof C. Below in his monumental work, the Vedgymight History of Australia. I attach a pic of the relevant pages.

G'day all, it's been a long while since I last posted, and I know that I have posted this photo before but I decided to give it another run. I know some of you wont have seen it anyway..... it was a long time ago.
I was visiting my friends Jenny and Mark last week and we were looking at some of my pictures and Jenny took a fancy to this one. Not so much as a railway photo, more I think as an image of a time and a place.
And that got me thinking the same way. I've always been interested in the setting as much as the subject.
Going by the open doors on the leading baggage motor it's my guess that the three car Bluebird is the morning service from Adelaide and it has just left Solomontown and is heading for Ellen Street where the remaining passengers will step carefully down onto the roadway.
I've had a look at Google Earth to try to locate those background houses with the towering TV aerials but today's railway alignment is different. I think those houses may be on Albert Terrace and that the broad gauge line was originally closer to that street. Maybe Cliff Olds can shine some light for us.
And speaking of light I really like the way the mid-winter light has picked out the contrast between the stainless steel fluting and the dark blue window band on the sides of these Bluebird railcars.
For those unfamiliar with 1960s Port Pirie it was served at that time by three railway gauges, the 5'3" and 3'6" of the South Australian Railways and the standard gauge, 4'8 1/2", of the Commonwealth Railways transcontinental line. Only the standard gauge remains, it connects south to Adelaide, east to Sydney, north to Darwin and west to Perth.
Apologies for my sketchy memory.
Best regards,
Peter Bruce.
My previous postings can be found at:
http://teenagerailfan.blogspot.com.au
And also the National Library of Australia's Pandora database, which I must check myself.
Posted by I was a Teenage Railfan. at 15:38 No comments: