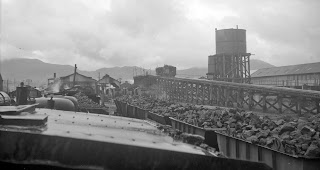 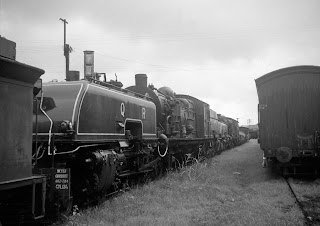 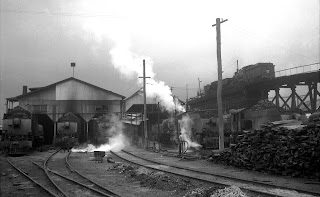 G'day all, I'm listening to the ABC broadcast of the Fourth Test ,Australia v England, and it's pretty depressing, Australia all out for 98, the Poms rampant.
So time to lift the mood a bit with some pictures taken around Rockhampton, Queensland back in late '64. The weather was hot and very humid, it always is late in the year in coastal Queensland. As can be seen from the photos the cloud cover was mostly heavy, in fact sometimes it felt like we were walking around in cloud.
...............Now it's Monday arvo, family Christmas duties intervened before I had time to complete this on Boxing Day.
The cricket news is no better so back to hot and humid Rocky 1964 and a visit to the Loco Depot.
At this time Rockhampton was home to all 30 Beyer Garratts but as can be seen some were already out of use. Of those that were still operational six are present in the photo of the running shed and Pb15 737, a product of Walker's Engineering 1926, is shunting the coal stage. You would be hard put to find a scene like this anywhere in the world today, perhaps on an industrial railway in China, but this is what a working loco depot looked like in steam days, it was busy, dirty, grimey, noisy and above all interesting. It was a monochrome scene on this day with an overcast sky, the Garratts provided the colour, they were Midland Red lined out in Yellow.
I've also included a couple of pictures of the old Rockhampton station, C16 421 has just emerged from the train shed and is in Denison Street passing McConnell's Hotel and it's Ultra-Modern Bottle Store. We didn't sample it's wares but we did try Mac's Rockhampton Beer in the station Refreshment Room, it was truly vile. I think the brand died a deserved death just a few years later.
I've got plenty more Rockhampton photos so there will probably be at least another couple of weeks postings at least.
The next posting will be in 2011.
So all the best to all for the New Year,
Peter Bruce.
Posted by I was a Teenage Railfan. at 14:35 No comments: 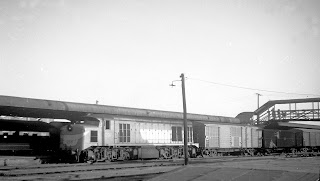 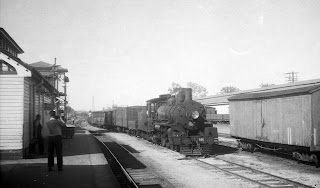 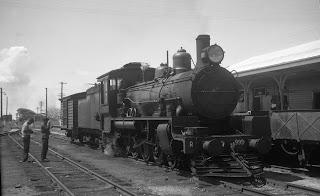 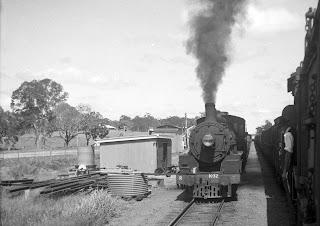 -
G'day all, I have had some very helpful feedback from Lynn Zelmer and John Browning about the sugar tramway photos I have posted recently, they have both come to the rescue of my failing memory, although perhaps my memory is not so bad, my knowledge was pretty thin to begin with.
See http://teenagerailfan.blogspot.com for more info and all earlier posts.
Anyway, on with the long, slow trip up the North Coast line. Four shots today and they bring us to Rockhampton, not even half way to Cairns, 396 miles and 11 chains to be exact. For those among us who are only metrically literate [possibly not the right choice of words], a chain is/was 22 yards, the length of a cricket pitch, and us Australians probably don't want to be reminded about cricket pitches at the moment, specifically the one at the Adelaide Oval where our cricket team is getting an absolute belting from England.
Asides aside we travelled from Gympie to Maryborough and Bundaberg to Rockhampton by the preferred mode, very slow goods trains and the intervening stretch Maryborough to Bundaberg was in relative luxury aboard the "Rocky", i.e. Rockhampton Mail. This train was diesel hauled but otherwise basically as it would have been in the '20s and '30s. the Queensland Railways in the early '60s were far from modern, in common with all the government railways in Australia they had been starved of funds for most of their existence and ravaged by the Great Depression and then the massive traffic and minimal maintenance of the second war. In the post-war years there was a huge demand for both catch up money and new money for housing and various infrastructure and our railways mostly just made do. From later in the '60s to the present day the railways in Queensland have benefitted from very large and continuing coal projects and are almost unrecognisable from the primitive organisation shown here.
The photos..... which I never seem to be able to display in the desired order.
848 is supposed to be the first, it is drawing into Gympie from the north and is about to pass a bogie covered wagon which perfectly illustrates the points made above. We arrived in Bundaberg on a Saturday morning and went off up into town for a feed leaving our scanty possessions in the cloak room. Bad mistake, when we got back the station was closed 'til the next day and I had to improvise bedding with the national broadsheet newspaper, "The Australian". This was on the floor of a railmotor trailer on a siding down near the river where it was noticeably cool and damp. Brown Bomber 999 is posing in the station yard for my fellow travellers.
Our accomodation north out of Bundaberg was something that we would have avoided if it had been possible, only the Queensland Government Railways would have a brakevan that had the guard's compartment at one end, a compartment for "drovers accompanying stock" at the other end and accomodation for the said stock in between. We substituted for the drovers and although we weren't actually accompanying stock we did travel with what the stock had left behind!! We met 1032 on a goods somewhere south of Rocky.
The next couple of postings will deal with Rockhampton itself but in the meantime here is 1266 on a northbound Fast Goods, the QGR trying to show that it is as modern as tomorrow.
In every way these were very interesting times in Australia and I was very fortunate to witness them.
Best regards,
Peter Bruce.