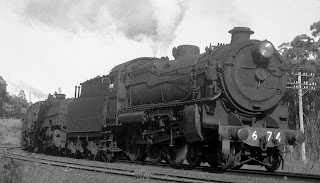 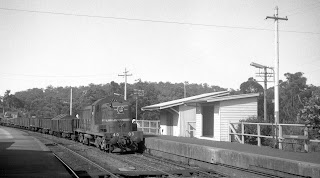 G'day all, I was away last weekend, hence no Monday Morning Photo.
So here is the last posting for 2009. Some final pictures from Fassifern, New South Wales.
Two of them are consecutive, 3674 leading a Garratt on a down goods train. Firstly waiting for the signal to clear and then minutes later rolling downhill past me and my camera.
The vertical shot makes a nice bookmark.
T'other photo shows a 40 class Alco diesel of 1951 vintage which the NSWGR actually acquired before the 60 class Garratts.
So that's it for 2009, thanks for all the nice comments along the way.
Best wishes to all of you and to your families for 2010.
See you then,
Peter Bruce.
P.S. All the previous postings can be seen at http://teenagerailfan.blogspot.com
Posted by I was a Teenage Railfan. at 16:10 No comments: 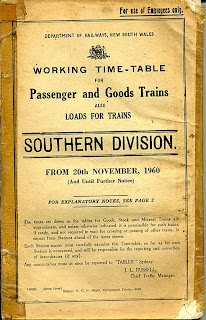 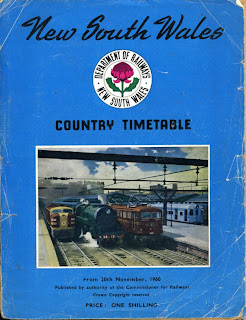 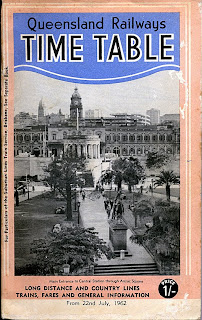 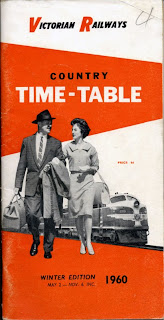 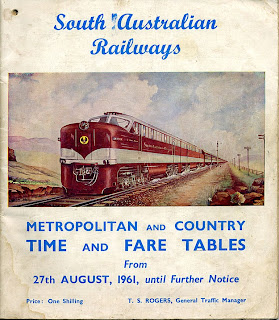 -
G'day all, my Tools of the Trade posting last week seems to have aroused some interest, not in the camera, but in the Timetable it was resting on.
So I thought a selection of early 1960s Public Timetables might be appreciated.
They were must haves for any traveller of the day.
But if you were a serious explorer of our various railway systems and were more than happy to brace yourself in the van as the slack ran in and out on a long goods train somewhere west of Woop Woop you really needed the relevant Worker, i.e Working Timetable......For the use of Employees only!
Not only was it more or less useful as a guide to railway traffic; being able to pull one out of the bag was a pretty handy way to big note oneself.
If you had a W.T.T. you were no railway dilletante, you were a fair dinkum railfan.
Well that's what I thought anyway. Perhaps I was right!
Regards,
Peter Bruce.
http://teenagerailfan.blogspot.com
P.S. Hopefully we'll get to see some of Roger Hill's work pretty soon. He's working on it.
Posted by I was a Teenage Railfan. at 21:50 No comments:

Tools of the Trade. 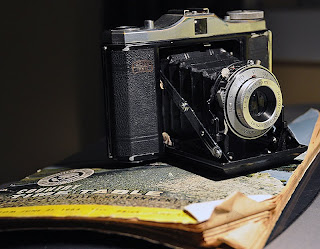 
Photo attached of the first two things packed before setting out for New South, I use the word packed rather loosely.

The old Zeiss and the NSWGR public timetable. 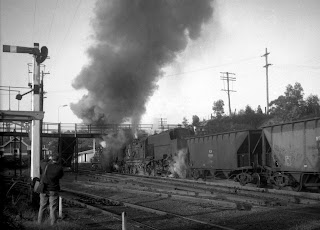 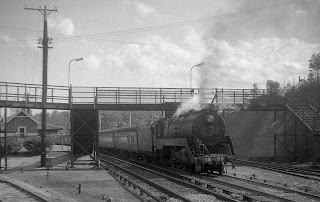 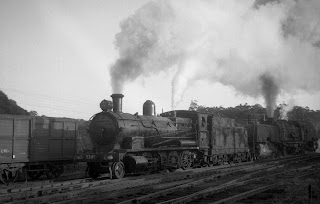 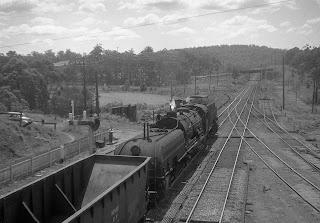 G'day all, this weeks photos are all taken at the down [north] end of Fassifern station, it might be helpful to take a look at Google Earth. There have been changes obviously but although it is no longer a junction station the line of the Toronto branch can be made out all the way to Toronto starting as the Greenway Pathway.
I think the Newstan Colliery junction is in the same place but now there is a connection to the north as well.
I am pretty sure that all four of the photos where taken in the company of Roger Hill who fills a bit part in one of the photos. Roger, I'd like to see some of the pictures that you took, I'd be very surprised if they weren't a bit classier than these offerings.....how about it?
I'm never sure of which order the photos will appear in but the northbound Garratt shot gives some idea of the station layout and the lie of the land to the north with the colliery line branching to our left.
Roger and I had planned to camp in the waiting room 'til first light but the signalman had other ideas so we ended up sleeping on the platform benches at Booragul, the next station north and returning on the first train next morning. I slept easy just a few feet from the roar and clatter of frequent southbound trains and woke at daybreak.
In time for the dramatic departure of the double headed coalie from the Newstan siding. I don't remember where the crossover to the up line was, perhaps between the platforms. In these two shots the train is still on the down line. Standard goods loco 5346 is giving the 60 class Garratt a bit more than a helping hand.
Later in the day, at 2.59pm to be exact, the down Midday Flyer paused very briefly at Fassifern to make a Toronto connection, a few doors slammed shut, the loco whistle popped and 3806 marched the Flyer out of Fassifern for a 3.25pm Newcastle arrival.
I took all these old time photos with a Ziess Nettar folding camera, its big advantage was its size, folded it was about 35mm thick. The disadvantage was that it only took 12 frames a roll so you had to be fairly sparing. I still have it although it's been retired since 1968 when I bought a beautiful Pentax Spotmatic from Bourke's Appliances, the ACTU store.
Explanation; ACTU= Australian Council of Trade Unions. As a member of the Australian Tramway and Motor Omnibus Employees Association I was entitled to a discount at their store.
Regards,
Peter Bruce.
Posted by I was a Teenage Railfan. at 22:05 No comments: