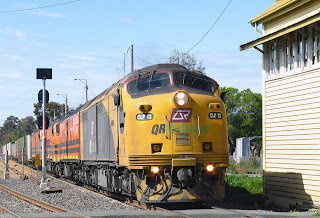 G'day all, I've finally settled down back in Melbourne after my trip to the Kimberley, took me a while, not quite jet lag but it's taken me a while and I'm looking forward to going away again but no plans yet.
Anyway there was next to no railway interest on this trip, I saw the northbound Ghan at Katherine, had a bit of a poke around Darwin station and then nothing until I was at Benalla back in Victoria. I had stopped off to take some pub photos and was getting some shots of the Northeastern Hotel by the level crossing at the up end of the station when the bells and lights started up and the booms went down. The hasty photo is attached.
A couple of things..... I've decided to revert to one photo per posting, it was originally "A Monday Morning Photo" and going back through the many previous offerings I've become aware of much repetition so I'm going to try to be more selective in future. The other thing is that I've become aware that many of you would prefer that your contact details not be so publicly available so not before time I've gone to Bcc for the mailing list, I hope this suits everyone.
In the meantime I've enjoyed the contributions from Bob Wilson and John Phillips every week, they are both a little more reliable than me.
Until next time,
Best regards,
Peter Bruce.
Posted by I was a Teenage Railfan. at 21:49 No comments: