G'day all, Cliff was good enough to fill me in on the details of the W44 operation. Thanks Cliff.
Regards,
Peter Bruce.

I received your photo again today, but from another source, which prompted my reply below.
Presuming that you are not fully aware of the Broken Hill - W44 situation, ore on that train was consigned from the Consolidated Zinc Corporation Ltd and the New Broken Hill Consolidated mines in Broken Hill to the Sulphide Corporation's Cockle Creek smelters, about 800 miles to the east and just south of Newcastle N.S.W.   All three companies were owned by the then Conzinc Rio Tinto company, hence the shipment of ore from those two mines only.   Also those two mines were the only ones in Broken Hill connected to the N.S.W. Govt. Railway standard gauge, the unique 700 mile marker (from Sydney) being between the Broken Hill Crystal Street marshalling yard and the Zinc mine.
The other two mines in Broken Hill at that time i.e. North Broken Hill Ltd and Broken Hill South Ltd railed all of their ore on the 3' 6" narrow gauge (Silverton Tramway Co. to the S.A. border, thence South Australian Railways) to the Broken Hill Associated Smelters at Port Pirie in S.A., about 250 miles to the west.   Some ore from ZC Ltd. and NBHC mines also went there.   North B.H. Ltd, B.H. South Ltd., and the Zinc Corp owned third shares in the Port Pirie smelters.   The N.B.H.C. didn't exist when those smelters were built, hence no ownership in them.
My father worked in the Zinc Corp. mill in the 1950's-60's and spent some time on the weighbridge there.   He said that when W44 first started (21st January 1961), hoppers were used however the ore would not readily discharge.   Various degrees of moisture content were tried, the more sloppy consistencies setting like concrete by the time that Cockle Creek was reached.   Consequently gondolas were substituted.   W44 was always diesel hauled from Broken Hill by 49 class diesels since inception, steam taking over east of Parkes.
The Port Pirie smelters still operate but are now owned by Nyrstar.   I went past the site of the Cockle Creek smelters late last year and the whole area seems to have been razed.   Unbelieveable!
Regards,
Cliff. 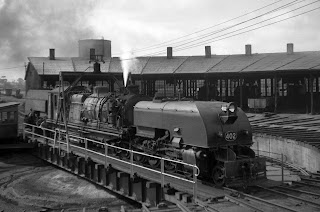 G'day all, when I was a young man [a teenage railfan] I would have thought that harking back 50 odd years was attempting to penetrate the mists of time!...........but now it seems like just turning back a few pages to refresh the memory.
Unfortunately some of those pages are missing or torn or perhaps just a little bit smudged. Attached are a couple that aren't.
Peterborough, South Australia again, 1962-63. Google Earth was unimaginable back then but it is worth a look now, the basic shape of the 1960s railway establishment can still be seen and the Roundhouse still stands as a homage to the railway and the town it once served and was served by.  An aerial photo taken in the '60s would have been mostly smoke haze.
I've decided to put up two photos this week, partly because I've been absent for a while and partly just because.

The mines at Broken Hill, just over the border in New South Wales, shipped their lead ore west to the smelters at Port Pirie via the South Australian Railways Peterborough Division. The 400 class Beyer Garratts did much of the work but the mines shut down for a few weeks over the Christmas-New Year period every year and the Garratts got a bit of a break and the Division went quiet.
408,402,409, 405 and 403 are taking it easy over the break. That's half the Garratt fleet, the other half must have been out on the track.
The other pic shows 402 on the table and only a couple of T class 4-8-0s lurking smokebox first in the shed. That's what you would have expected to see back then, 48 or maybe 49 weeks of the year.
Best regards,
Peter Bruce
Posted by I was a Teenage Railfan. at 21:40 No comments: