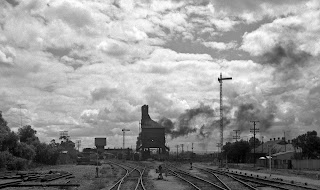 G'day all, went back to work last week, after nearly six weeks, and I was that excited I forgot to post the Monday Morning Photo.
I've decided to return to what was probably my favourite part of Australia at the time, the Mid North of South Australia and the Peterborough Division of the South Australian Railways.
At the time I took the two photos attached I was just finding out that it might very well be the aforesaid favourite place.
This was my first big trip interstate, winter 1962, Melbourne-Sydney-Broken Hill-Peterborough-Port Pirie-Adelaide-Melbourne, I was 18 and a bit and the 2nd class fare was about $15 for a student concession. It was actually in Pounds,Shillings and Pence but my keyboard doesn't know about the old money.
$15 today might get you from Southern Cross Station to Flinders Street Station in my cab in heavy traffic.
I'm referring back now to a February 2007 posting that went only to Rick Dempster and some of his workmates.
Earlier on this morning, at 3.59am, I had arrived at Peterborough on the Express from Broken Hill and it was a bit too early and too dark and I was a bit too tired to do any exploring so after I had seen the Brill railcar off to Port Pirie I retreated to the Waiting Room for a bit of a kip before the sun rose.
In the manner of railway towns everywhere Peterborough never slept so my sleep was pleasantly disturbed by the sounds of a busy yard, the clanking rods of a little T class engine or the heavy rumble and shuffle of the 400 class garratts.
Come daylight it was off to the Refreshment Room for a cuppa and a piece of fruitcake and then a walk down to the Roundhouse.
As I got close 244 and 209 on a stock train clattered into town from the west.
The wind was blowing strongly from the south and the clouds were raggedy and it was chilly.
The sounds come back to me almost as strongly as the sights.... boots crunching on ballast and gravel and the roar of that distant 400 down by the coal gantry coming and going on the wind.
It was all intensely interesting to me then and it would be today if I could do it again.
I count myself very lucky to have seen Australia as the steam age faded and progress and prosperity gathered pace.
Best regards,
Peter Bruce.
Posted by I was a Teenage Railfan. at 17:02 No comments: