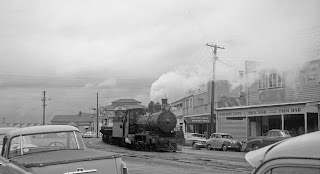 C16 421 has only progressed a few yards up the street, no metres in 1964, but the rest of the scene is a bit more informative about the railway end of town as it was in so many places back then.

Rockhampton railway station wasn't in the middle of town, it still isn't, and many passengers would have been met by family or friends and whisked away by car or maybe taxi to more salubrious parts of the city.
But in my experience of long distance train travel before the days of universal car ownership many of my fellow sitting up all night passengers were single blokes either travelling to a job or searching for the next one.

And what would such a bloke be looking for when he stepped off the Rocky Mail..........a beer, a feed and the local paper for the job ads and maybe the form guide.
They're all here, next to the station, the aforementioned McConnell's Hotel, the newsagent and the Railway Cafe [prop. A&V Angelos].

I don't think I ever ate at a cafe anywhere on the East Coast that wasn't run by Greeks, three courses for 7/6 plus bread and butter and a pot of tea, 75 cents in today's money. If it was breakfast it was likely a  very generous pile of eggs and bacon and tomatoes and toast.

It would be pretty easy to get misty-eyed about the Good Old Days but they're long gone.... as I've said before, I'm just glad I was there.