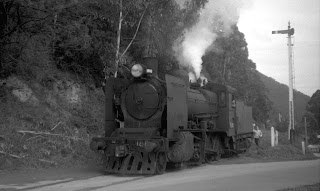 -
G'day all, seems that my posting of last night was recieved in full by at least some of you....good.....I wondered what had happened.
Seems like a good excuse to post another picture.
Regards,
Peter Bruce.
P.S. Anniversary of the Benalla tragedy, three people killed when steam hauled special collided with a B-Double on a level crossing just outside Benalla. Good friend Adrian Kiely among them.
Posted by I was a Teenage Railfan. at 22:07 No comments: 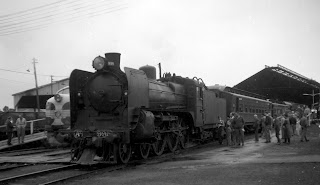 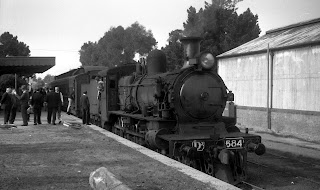 G'day all, still having internet problems, gigabytes disappearing down the plughole, but I'll risk going on line for a little while so that MMP appears on time.
A couple of VR classics this time, in memory of Bob Lawrence, a long time Victorian engineman and a member of this group who passed on September 30th and who was seen off by a large gathering of family and friends at Springvale last Tuesday.
In the early '60s Tom Murray and Norm White ran a series of weekend excursions which catered to railfans by attracting tourists in large numbers. The railfans and the tourists were both kept happy, while the tourist went off on bus trips interesting things happened on the rails.
684 is at Beechworth coupled to the "Norman" car and about to set off back to the junction with the Bright line at Everton. I can't remember the year or the sequence of events just that it was a very interesting and varied trip.
995 is at Geelong and we are about to depart for Melbourne as the weekend away winds down. This was the end of a tour of the southwest of the state, we got into SA as far as Millicent as I remember.
Perhaps someone out there can fill in the considerable gaps in my memory?
Older postings can be viewed at http://teenagerailfan.blogspot.com
Take a look at the links too, Mike Venn has a much better claim to have been a teenage railfan than me. Compared to him I was practically geriatric!
Best regards,
Peter Bruce.
Posted by I was a Teenage Railfan. at 22:06 No comments: 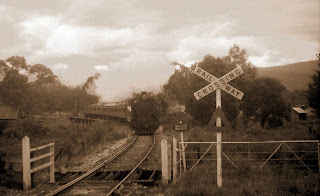 I posted this on Wednesday 1/10/08 and I thought I should add it here.


Mickey Burrett rang me last night with the sad news that Bob passed at about 2am. Bob was diagnosed earlier in the year with cancer and had been in hospital in Dimboola for some time. He was a life time railwayman, he must have had very close to 40 years service with the Victorian Railways and it's successors and also with National Rail at Dimboola. Bob was also an active unionist and office holder with the Australian Federated Union of Locomotive Enginemen and was qualified as a steam locomotive driver.

He was also a railway enthusiast and a modeller and a very sociable bloke. I will miss him and those of you who knew Bob will too.

As far as I know he is survived by his mum, his brothers, his son and I'm pretty sure at least one grand child, make that three...... And lots of mates.

So long Bob, it's been good to know you.

Peter Bruce.
Posted by I was a Teenage Railfan. at 20:50 No comments: