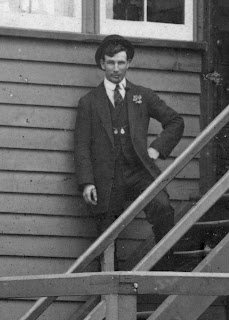 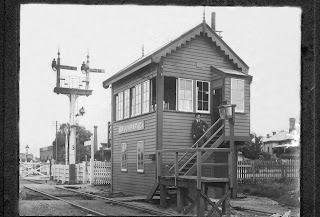 I've had the attached photo of Ballarat C Box for ages and I've no recollection of how I came by it except that it was in the family.

I didn't attach any particular importance to it other than as a record of the early 20th century on the Victorian Railways.

But.....not so long ago I found out that my paternal Grandma's younger brother, Bill Howard, met eternity right here, at Ballarat C Box on or about May 9th, 1915.

He was hit and run down by a locomotive and died shortly afterward in hospital. His brother-in-law quoted him as saying,
" I was a fool to go for the staff, I completely forgot about the other train".

Presumably he was the signalman on duty.

So maybe he is the sportin' looking chap posing on the steps of C Box.

It is obviously a professional photo, it is mounted on card and is quite badly damaged. I've had a bit of a go at tidying it up but my skills are very limited.
Posted by I was a Teenage Railfan. at 22:48

Have just been doing some exploring on Trove and found an "In Memoriam" notice for him.
http://trove.nla.gov.au/ndp/del/article/2110446?searchTerm=howard%20ballarat%201915&searchLimits=l-title=The+Argus+%28Melbourne%2C...|titleid%3A13|||l-australian=y#pstart390691
Maur